Ultimate Guide to Best Four Wheelers For Kids of Any Age 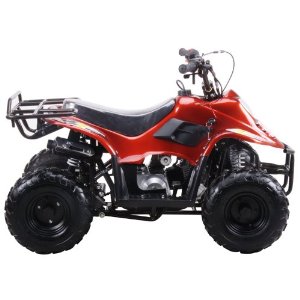 Recently we bought two small four wheelers for our boy’s, ages twenty months and three years. I have to say this has made our time outside even more fun than normal. Now you may be thinking this is a little young for this type of activity but if you do your research there are actually many small 4 wheelers that are appropriate for even the youngest child. Obviously you’re not going to run out and buy a gas powered four wheeler for a two or three year old but that doesn’t mean there are not great options out there for this age.

Some electric powered four wheelers are absolutely great and really give your little ones a sense of accomplishment. Now when our kids do get a little older we will definitely be upgrading to gas powered but for now they will just have to wait. But this hasn’t stopped me from researching all different types of small four wheelers so that when the time comes I will already know what we will be buying. And this is where this article comes in; below you will find several of the best four wheelers for kids of any age. So if you are looking for a quad that is for a three, a five or even a ten year old then this is the list for you.

If you are looking for your child’s very first four wheeler/ riding toy the Tek Nek Honda Quads are the perfect choice.Our boys have one very similar to this that our oldest got for Christmas a few years back. The Tek Nek Honda  Quads come in three models the Rumblin’ ATV, the Superstar ATV and the TRX ATV they look  just like a real Honda ATV including authentic decals, headlight and light up gauges. There are also a total of five sound producing buttons on the dash including the turn signals. It also has a tall walker bar on the back of the seat that allows little ones that are first starting to walk to hold on and push. But the absolute best part of this little quad is that when the handle bars are turned there is an engine revving sound and the seat vibrates giving it an even more realistic feel. It runs on three “AA” batteries that are included, has a 65 pound weight capacity and even has an adjustable volume control on the under side.

Now if you are looking for something for your toddler that’s 1 to 3 years old that actually moves on its own then you really need to check out the Power Wheels line of Quads by fisher Price.They have several models to choose from for both boys and girls. A few examples include the Lil’ Quad, the DC Super Friends Batman Lil’ Quad and the Toy Story 3 Lil’ Quad or for there’s the pink and purple Barbie Lil’ Quad, Dora the Explorer Lil’ Quad and the Disney Fairies Tinkerbell Quad. Each of the Power Wheel four wheelers are basically the same with built in footrests, a cargo rack on the back and an easy push button operation for simple stop and go plus they come with a 6 volt rechargeable battery and charger. It has a top speed of 2 mph and comes with a one year bumper to bumper warranty. This is actually the one we bought for our youngest son and he absolutely loves it and it is still big enough that our three year old can ride it when he is trying to start a fight with his little brother.

Ok so that’s enough of the toddler toys from here on out we are going to be looking at some of the better and more fun stuff. These next few are perfect for those that aren’t quit old enough for a gas powered four wheeler but too big to have fun on the smaller stuff. The first ones I will talk about are also made by Power Wheelers but don’t let that fool you they are great.

Some good examples of this model are the Power Wheels Kawasaki Brute Force Camo and the Power Wheels Kawasaki KFX. These power wheels are truly like small four wheelers, they have two speeds or gears plus reverse. First gear has a top speed of 2.5 mph and the second gear has a top speed of 5 mph. So there is plenty of power for just about any terrain like grass, dirt and gravel though steeper hills do give them problems especially when it is wet. And if you feel your child isn’t ready for second gear it can be disabled with a small latch that screws down. They are powered by a 12 volt rechargeable battery that comes with a charger. And if you are wondering how long a charge last it can very from one to two hours depending on the weight of the rider and terrain. Our oldest son that weighs about forty pounds has the KFX and it lasts about an hour and a half at our house which has small rolling hills. By the way once he gets on that thing he doesn’t stop until its dead or we threaten his life to come in and eat supper.

Another brand that is much like the Power Wheels line of four wheelers is Peg Perego. They have a full line of Strollers, baby products and battery operated toys like the Peg Perego Polaris Outlaw. The Outlaw comes in two colors pink and red and looks just like the real thing. So if you have a full size Outlaw now your son or daughter can have one just like mommy and daddy.

The Peg Perego quads are very similar to a Power Wheels including the two speeds with second gear lockout plus reverse and the all terrain wheels for dirt, gravel, pavement and grass. It is also powered by a 12 volt rechargeable battery with included charger. Even the price is about the same as the Power Wheels models. The only real differences is the weight capacity on the Peg Perego is twenty pounds heavier at 85 lbs were the Power Wheels is only 65 lbs which could make a big difference in the number of years your kids are able to ride the little four wheeler. Giving them a little more time to mature before moving up to gas powered.

Best Four Wheelers for Kids 8 Years and Up


This is the last battery operated four wheeler that will be on this list but it is probably the best four wheelers for kids. The Razor Dirt Quad Electric Four Wheeled Off-Road Vehicle is down right awesome it has a quite chain driven 350 watt electric motor that will produce speeds of up to10 mph. It has a steel powder coated tubular frame, shatter resistant plastic fairings and a rear suspension. The Dirt Quad also has handle bar steering with twist grip hand throttle. It also brakes just like a typical full size four wheeler. Other features include rear disc brakes, padded seat, pneumatic tires and front brush bar. The maximum weight limit for a rider is 120 lbs. One thing I don’t like about the Razor is it requires eight hours of charging for forty minutes of riding. The best way around this is to buy a spare battery and have it charging so you can switch them out has they go dead. If you are wondering what actual owner’s think of this product you will be happy to know it has a four star rating on Amazon.com, you can click this link to see their reviews.


Typically the first gas powered quad that a kid will get is a 50cc and then move up to 90cc and bigger all they get older. These small four wheelers have all the basic things a full size four wheeler will have only smaller. It is hard to put a recommended age on these types of rides because everyone is different. Some people are a lot more protective of their kids than others to the point that some would consider them over protective. While others seem to think their little ones are indestructible. I think I fall somewhere in between. And this is without mentioning all the laws about kids and ATV’s. All I’m saying is there are youth racing leagues for some fairly young kids.

Please just understand what these machines can do before sticking your kids on them, they are dangerous. And for heavens sake buy some protective equipment for them it is well worth the money for their safety. Anyways I will get off my soap box.

Now I have read countless forums and blogs online about all the different brands like Polaris, Alphasport, Suzuki and so on. It seems that everyone has their own opinion on what the best brands and models are. All I know is that when my children are of age and I feel they are mature enough I will be getting them their own gas powered four wheelers. I will probably just buy the cheapest used model I can find. Or a cheap import from China as long as it is structurally sound and overall safe. Besides how many kids need a high dollar quad that will be torn up or out grown in a year.

And there you have it a complete list of the best kids four wheelers for any age. So whether it’s for a Christmas present, birthday present or just because, I hope this article has helped. I know after writing all of this I am ready to buy something new for my kids right now!